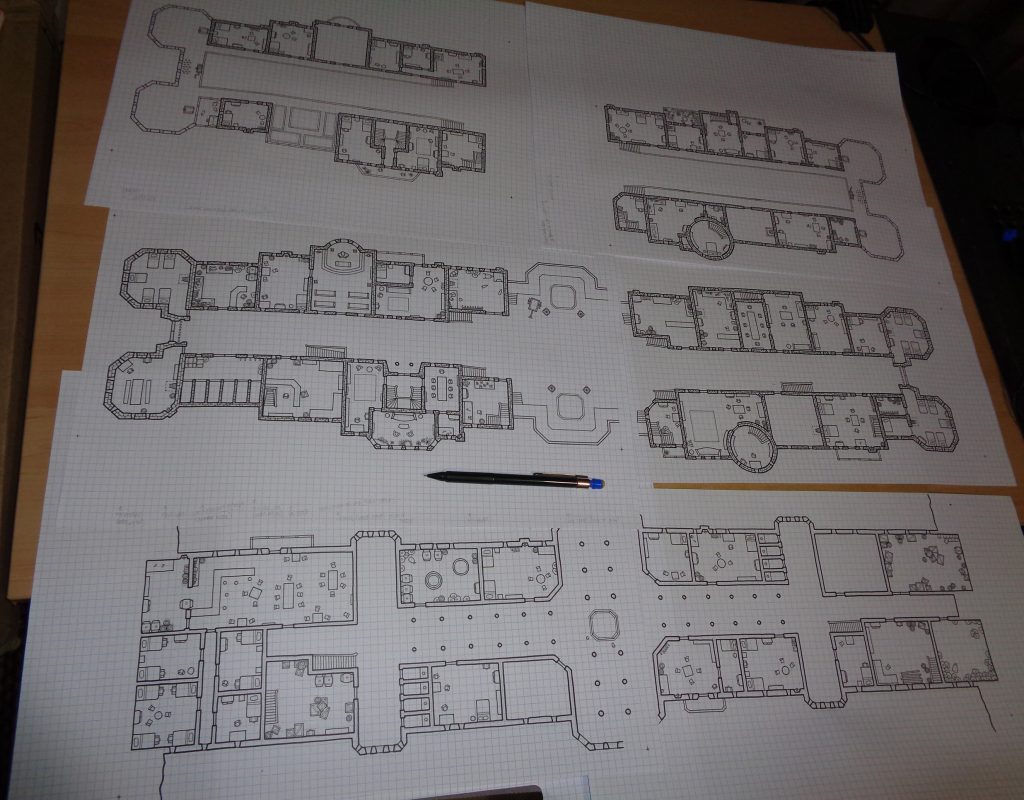 Inking all this took a little longer than I expected, but here’s the town on a bridge. There are two levels on top of the bridge deck and another one underneath. The town has a tavern, a livery, various shops, a few gardens and a few empty buildings so you can add in whatever you need that isn’t there.

I’ve got a little bit left to ink tonight and then I’ll start on the color tomorrow. Anyway, what do you think so far? 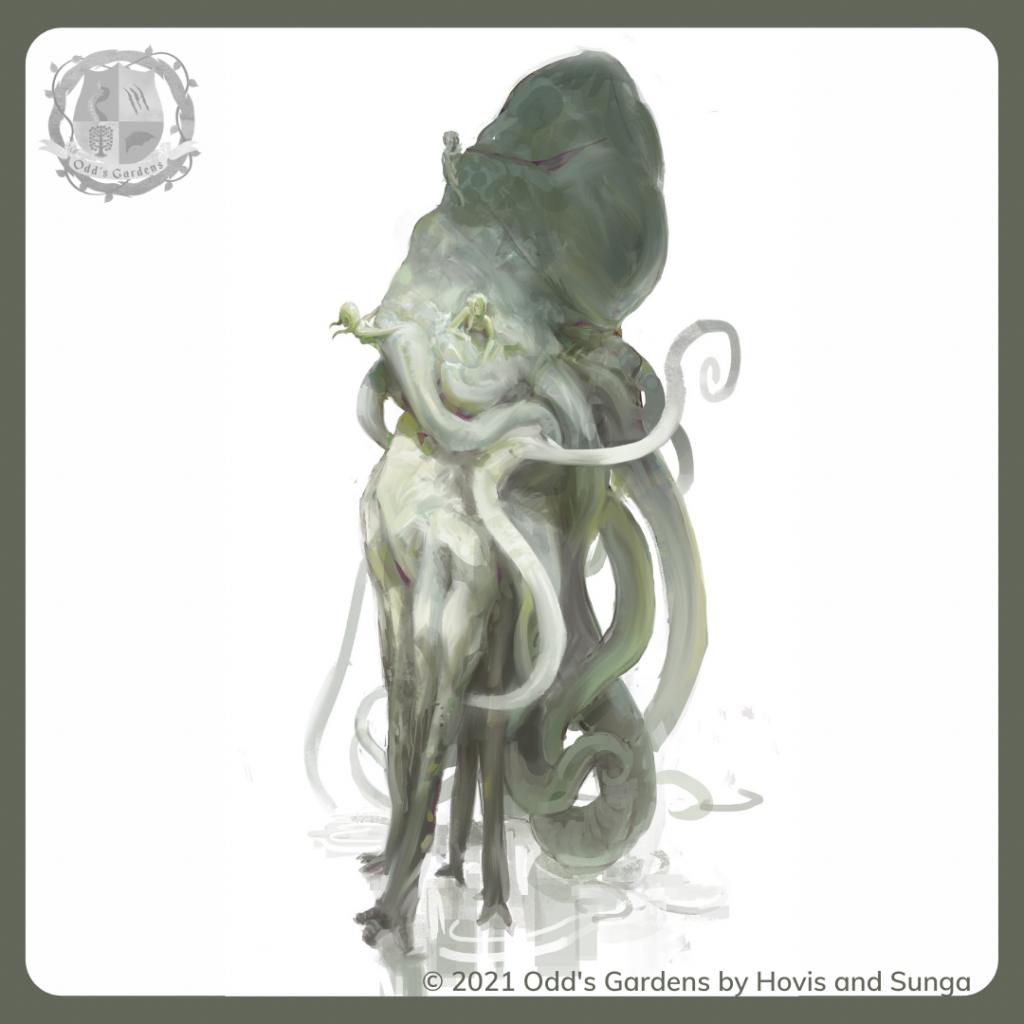 A few weeks ago, I posted a map called the Smoldering Abyss. It was part of the Black Loch and one of the more notable things living there was a monster called “the Whisperer.” Well, Jamie, a longtime patron, offered to write up some stats and do an illustration of the creature.

You can download it here. If it’s the kind of thing you’d like to see more of, Jamie and his partner Josh are making monsters over at their patreon page, Odd’s Gardens. Josh is an insanely talented artist and the dude is probably going to end up illustrating the actual Monster Manual one day, but, until then, he and Jamie are making their own.

By the way, let me just back up that last statement: This is Josh and this is the 5th ed. Monster Manual. Tell me I’m wrong.

Anyway, have a look at their stuff. The art is unreal and there are free versions of most of the creatures.

Well, I’m about to start inking the next map. It’s a town built on a bridge over a canyon and I’ll post photos once I’m done in a day or two. I’m really happy with it so far and I think you’re gonna like it. Okay, back to work.

As promised, here’s an overview of the history and lore of the Black Loch. If you’ve read over all the DM notes for the loch, you probably won’t find much new here, but it’s intended as more of an introduction to the setting, with basic summaries of the locations and a few notable people. Of course, I’ll be updating this in the future, once I get some more locations finished.

Okay, time to get started on the next map! 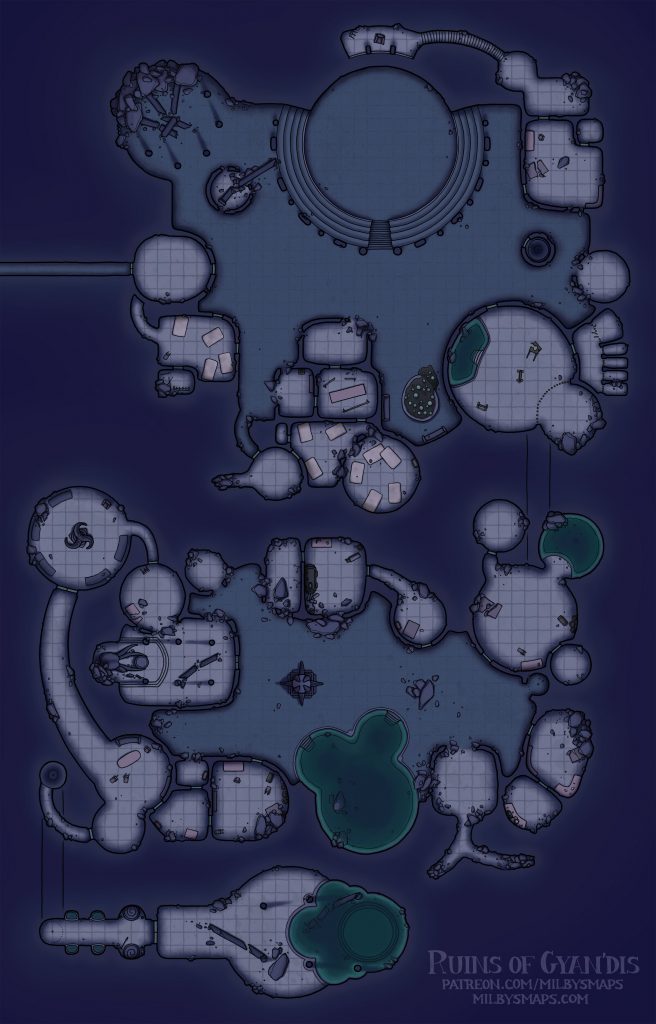 Gyan’dis is a ruined illithid settlement in the Black Loch. The colony thrived in its corner of the loch for over 800 years, until it was brought down and its inhabitants wiped out by Gyan’dis’ own elder brain. Normally, I’d talk a little more about the background of the map, but I’m going to leave that for a day or so, because I’m planning on writing up an overview of the history and lore of the Black Loch, which I can probably get done sometime tomorrow.

It’ll have basic information on the loch, along with brief summaries of the locations I’ve drawn so far. I think it’ll be a good introductory overview of the setting, which should be useful to patrons and non-patrons alike. Also, for non-patrons, I promise it’ll explain more about why the elder brain destroyed its own colony. I wouldn’t leave you hanging like that.

Once that’s done, I’ll be getting started on last month’s Cartographic Congress winner, a town built on a bridge over a river canyon. I’ve been champing at the bit to get started on that and it’s taking all my willpower to write up the Black Loch overview first. But it’s long overdue, it needs to be done and it’s only a day’s work at most, so I’m just going to bite the bullet and get it written.

After the bridge, I’ll be drawing the next historical map, Scotland’s Coxton Tower. And then we’ll probably find our way back to the Underscotland for another piece of the Black Loch.

Sound like a plan? Either way, let me know what you think!