Yeah, so anyway, the Opaline *ahem* Grotto is a natural cavern with unmined opal deposits in the walls. There’s also a small cave system behind one of the houses leading to the Bitterwash River in case your party happens to need a shortcut.

Since I’d originally drawn this as a rectangular chamber on the Brazenthrone overview map, I updated it with the new shape. The print and VTT versions of it are here (they’re free). I know I updated this the other week and I apologize to anyone who just printed it and is staring at the screen like, “This f#@%* guy…” But this is probably the last time I update it. Unless it’s not.

Next up is last month’s Cartographic Congress winner: a city built around a volcano. After that, we’re going back to Brazenthrone for Burke’s Hall (23 on the overview). And then I’ll be knocking out a map from the Great Vote. I’m thinking the Great Garden sounds good, but I reserve the right to change my mind to Greenskin Rock. Screw it, I’ll put up a vote on the patreon. Decisions are hard.

There are DM notes for this map available to patrons. 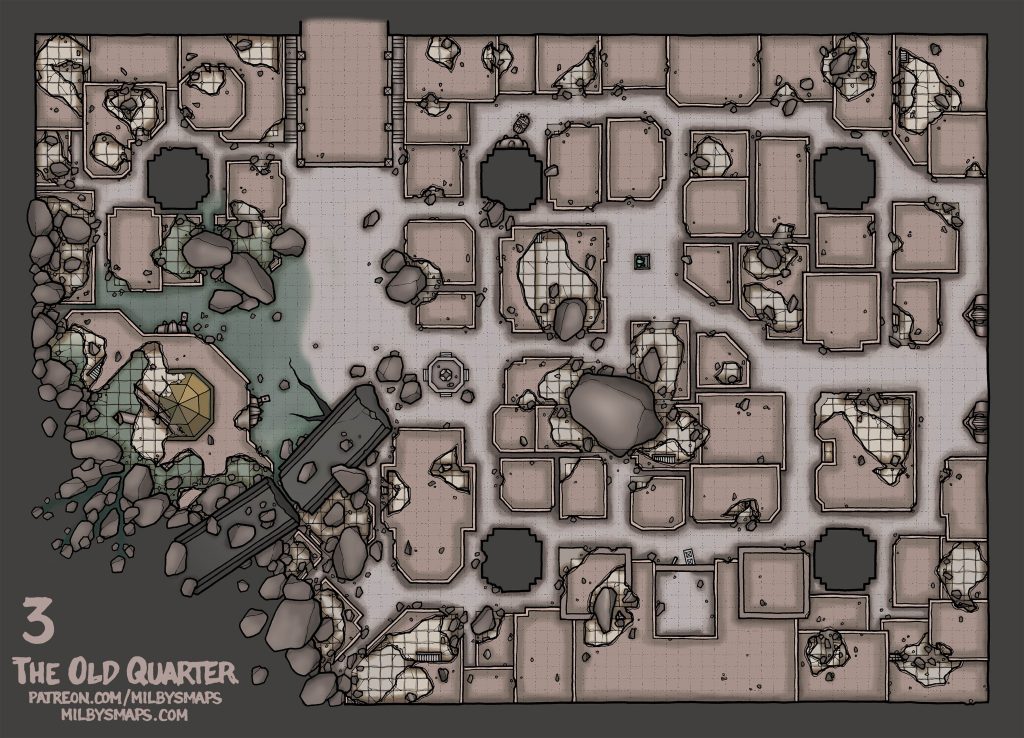 With this done, the shattered wreck that is Brazenthrone‘s Old Quarter is now finished. Next up is last month’s Cartographic Congress winner: a small castle on a floating island in the sky. Following that, we’re going back to Brazenthrone to do the Opaline Grotto (24 on this map). Then it’ll be the most recent Cartographic Congress winner, a city built on an active volcano. So, you know, Hawaii. Not really. Kind of, though.

I’ve got another bunch of tokens I made for my game as well and I’ll have those up in the next few days. There’s some town guards, pirates, mind flayers and a hill giant that one-shotted an NPC in my game the other week. The dude valiantly charges forward and says, “You take the goblins, I’ll handle the big guy!” And then that giant did to his head what Tiger Woods does to golf balls. Good effort, though, buddy. Good, solid try.

There are DM notes and hi-res print and VTT versions of this map available to patrons. 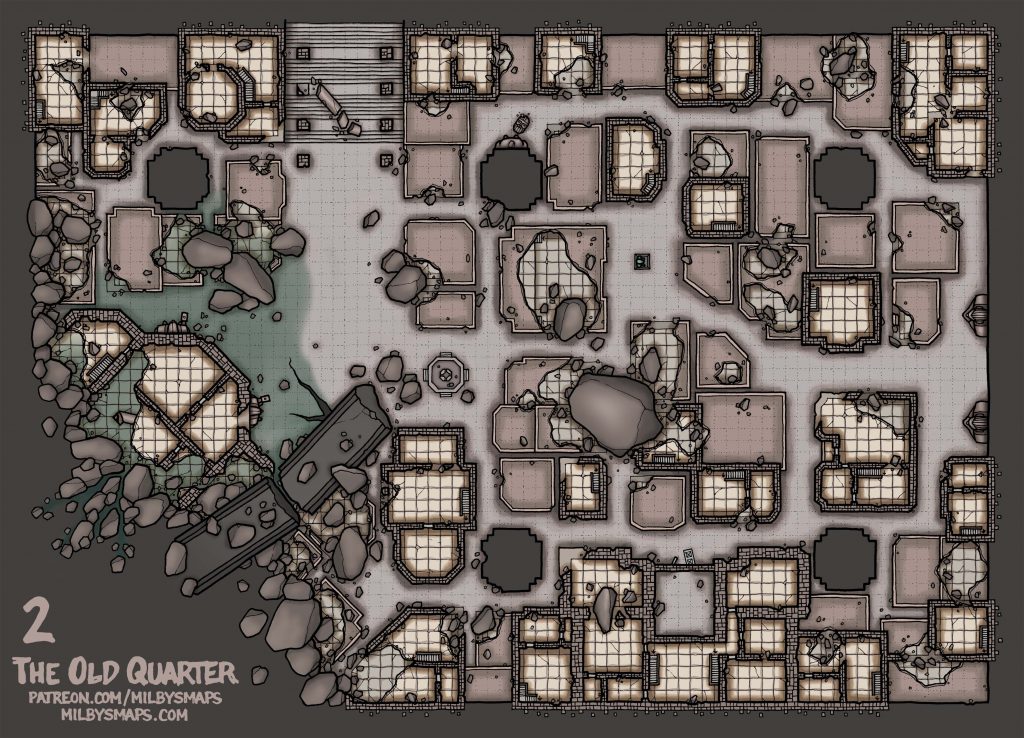 Turns out there was a short on the motherboard and, since my computer was an unusual make, it couldn’t be replaced. But I happened to have the money for another computer, so everything’s fine. The new one’s a desktop, though, which is taking me some time to get used to after around 12 years of laptops. Like, this keyboard is enormous and it makes so much noise when I type. And I have to keep this thing in the same place all the time? Sigh, fine.

On the other hand, I now have a monitor the size of a bus windshield, which is nice. I’d been meaning to get one for D&D anyway. I’m not installing it in a table or anything, but I think we’re going to be using digital maps from now on.

So anyway, the map. There’s one more level of the Old Quarter to go and I’ve got it drawn already, so I should have it done in a day or two. Talk to you then!

These are the ruins of Brazenthrone‘s Old Quarter. Known in its time as the “Temple Quarter,” it was once the heart of the city, much as the Great Hall is today. The Quarter’s downfall was brought about by a force more powerful than any other: geology. A tremendous earthquake, brought on by the shifting of magma deep underground, shattered one of the chamber’s support columns and brought down huge sections of the chamber’s ceiling.

After being declared irreparably unsafe by the Ministry of Engineering, the entire area, as well as the Old Palace to the north, were reluctantly abandoned and sealed off.

Today, the Old Quarter lies ruined, infested and partially flooded due to a leaking ventilation shaft. Going in there for any reason is a terrible idea, but your players will charge in headfirst because this is the kind of place where there’s cash and prizes to be found. And besides, making prudent decisions is the DM’s job.

I’m thinking this will be three levels in total. The to-do list for Brazenthrone is getting shorter and shorter! I can’t wait to get it all into the one image and see how it looks!

There are VTT and print versions of this map, as well as an expanded annotated version, available to patrons. 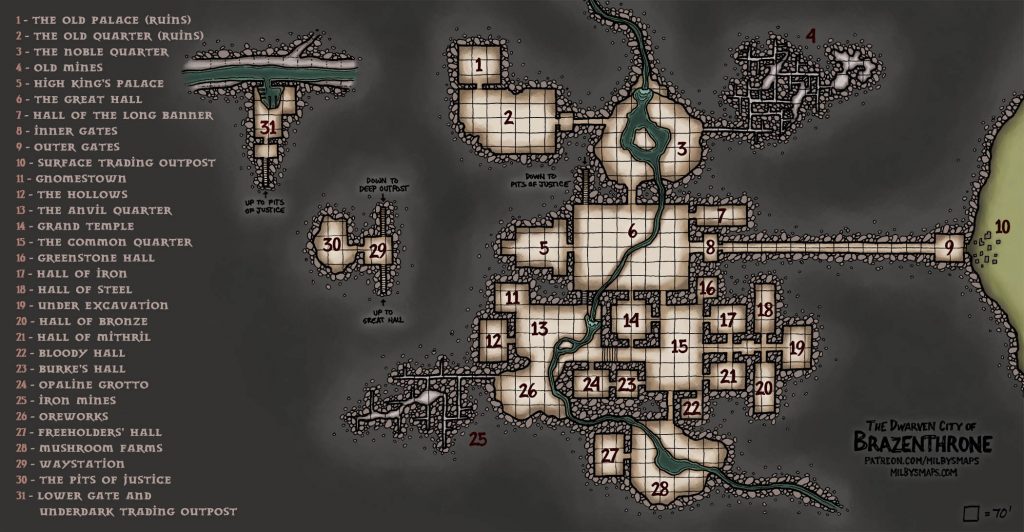 Sorry this is a little late, I had something come up last night before I could get it done. Anyway, here it is! I reserve the right to change 19 and 27 if I come up with a better idea for them, but I’ll update the map again if I do.

Here’s the non-annotated version. You can download the print and VTT versions for free from my patreon here. The VTT versions aren’t marked with dimensions, they’re just a smaller file size you can use as handouts.

All right, time to get started on the Old Quarter! 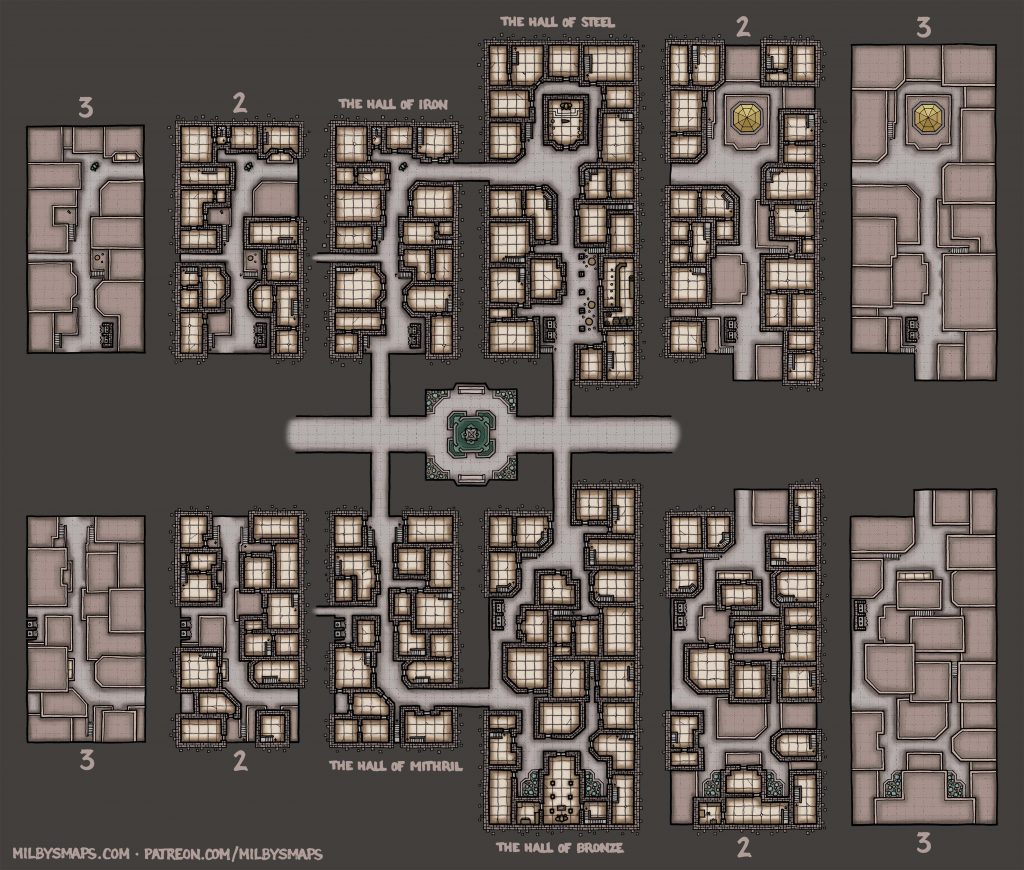 Here are the second and third levels by themselves.

These halls are the “suburbia” of Brazenthrone, which makes them a little hard to say much about. They’re where normal dwarves live. They’re neither the wealthiest commoner district nor the poorest. The wealthiest is the Promontories, of course. The poorest will be the Hollows, to the west of the Anvil Quarter. It hasn’t been drawn yet, but that’s where it’ll be. Ye olde hood.

With these chambers done, a finished Brazenthrone is starting to come into sight. As I promised earlier, I’m going to redo the overview map of the city to include all the unmarked chambers. That won’t take long and it should be up later tonight. I’ve had a few people tell me they’ve been using it as a handout recently and, with six chambers drawn that aren’t marked on there, it’s probably a good time to do it. Anyway, I’ll be back with that in a few hours! 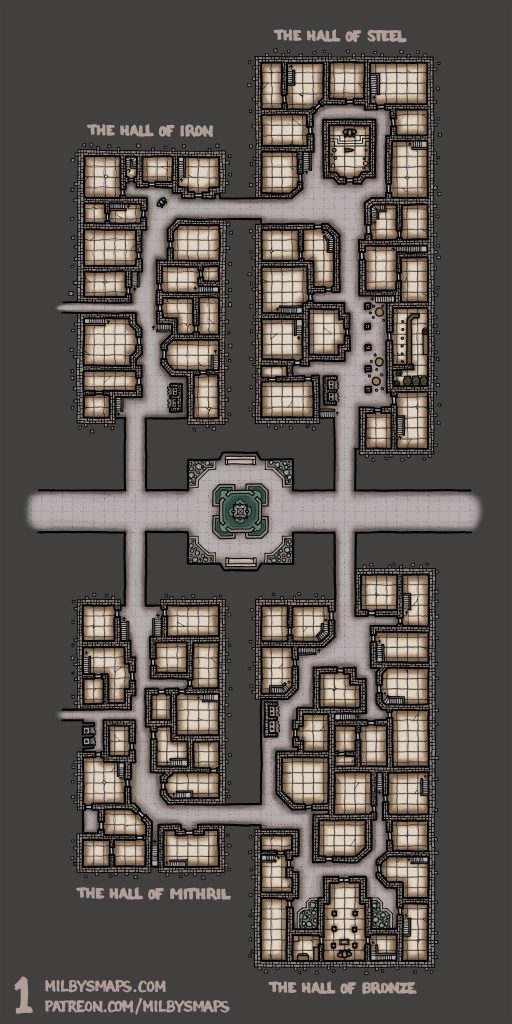 These are the residential chambers on the lower-right side of this map surrounding 17, which is the fountain in the center. I’ve got all three levels of this drawn already, so the rest should be up in a day or two. I just need to color them. I’m also going to update the map in the link to include all the residential chambers. I’ve been meaning to post my Roll20 landing page too. It’s… a little different. There are going to be a lot of posts this week.

Once those are up, I’m going to start on something a little more interesting: the Old Quarter (7&8 on the map above). Originally the center of Brazenthrone, it was abandoned and sealed off following a disaster that left the entire chamber in ruins. What that disaster was, exactly, I’m not sure. But I’ll know by the time I’m done and it’ll all be explained in the DM notes.

All right, I’m gonna go knock out the rest of this thing! 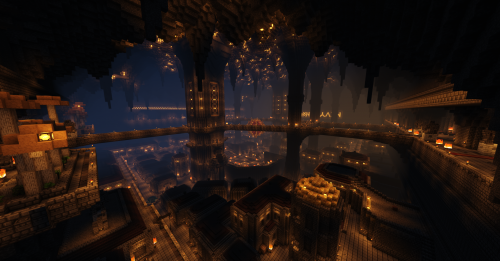 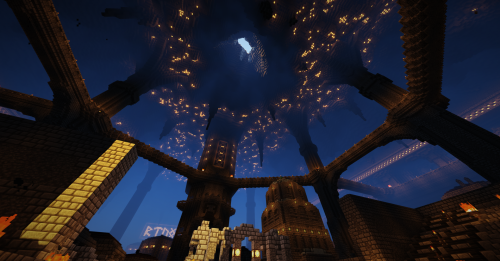 Someone made the Great Hall of Brazenthrone in Minecraft and it is incredible. A reader named Fonta sent me these pictures and I wanted to share them with everyone. The first picture is from the northeast corner of the Promontories, which is the upper right corner of this map. The second picture is from the amphitheater. I believe the hole in the center is a ventilation shaft.

These shots show the city from an angle that the maps don’t, but this is how it looks in my imagination. This is it exactly. 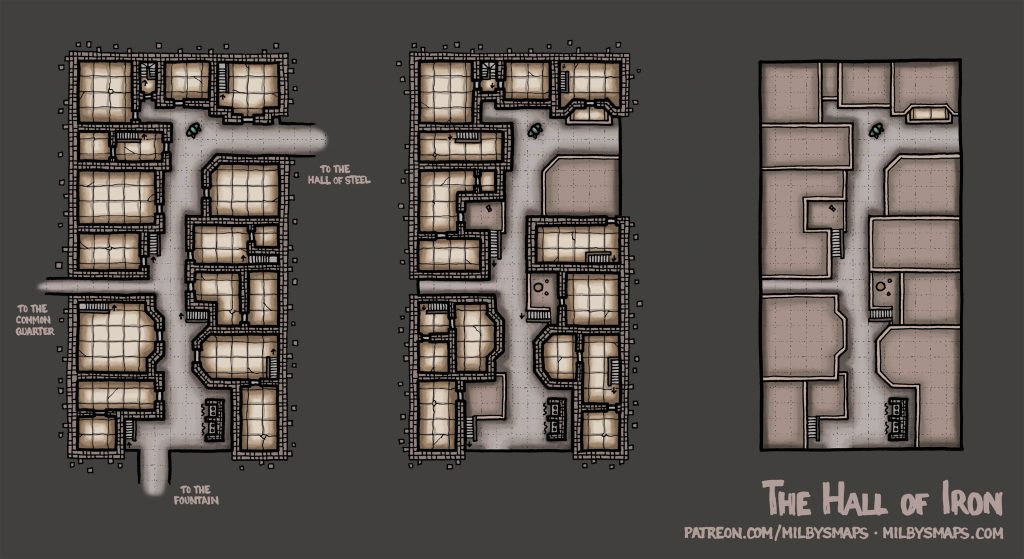 The Hall of Iron is a residential district of Brazenthrone. Admittedly, having nothing but residences, it’s not the most exciting part of the city. But a city needs homes and not everyone can live in some kind of dwarven Winchester Mystery House (here, let me save some of you the time).

This is one of a cluster of residential chambers surrounding a fountain plaza, which you can see here (17 and the nearby unlabeled chambers). I’ve decided to do the plaza and the rest of these chambers as one map, which I’ll add this to. That’ll let me consolidate everything into a single annotated version and a single page of DM notes, which is handy because, frankly, there isn’t much notable stuff here. This is Brazenthrone’s version of suburbia.

Next up is last month’s Cartographic Congress winner, The High Temple of Mystra, a massive library and storehouse of arcane objects dedicated to the goddess of magic. After that, more Brazenthrone, of course.

You can download all print and VTT versions of this map from this post on my patreon or from Google Drive. 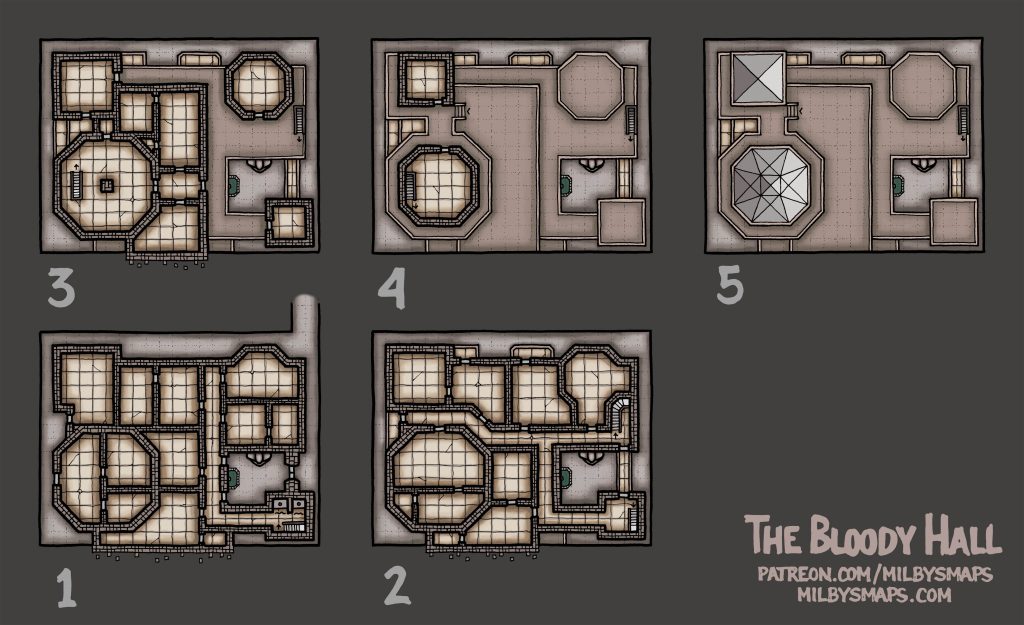 Here are the DM notes. There is no annotated version, since all the rooms are residences.

The Bloody Hall is a residential district of Brazenthrone, located just south of the Common Quarter. It’s unique on account of all the residences here being in a single, large building formerly known as “Amber Manor.” There are more details in the DM notes if you’re interested.

Next up is the Hall of Iron, another residential district adjacent to the Common Quarter. After that, I’ll be doing last month’s Cartographic Congress winner, the High Temple of Mystra. Then it’ll be back to the mountain for the rest of the Brazenthrone maps I owe you. There’s not too much of the city left to go!

All the print and VTT content for this map is available on my patreon here or on Google Drive.